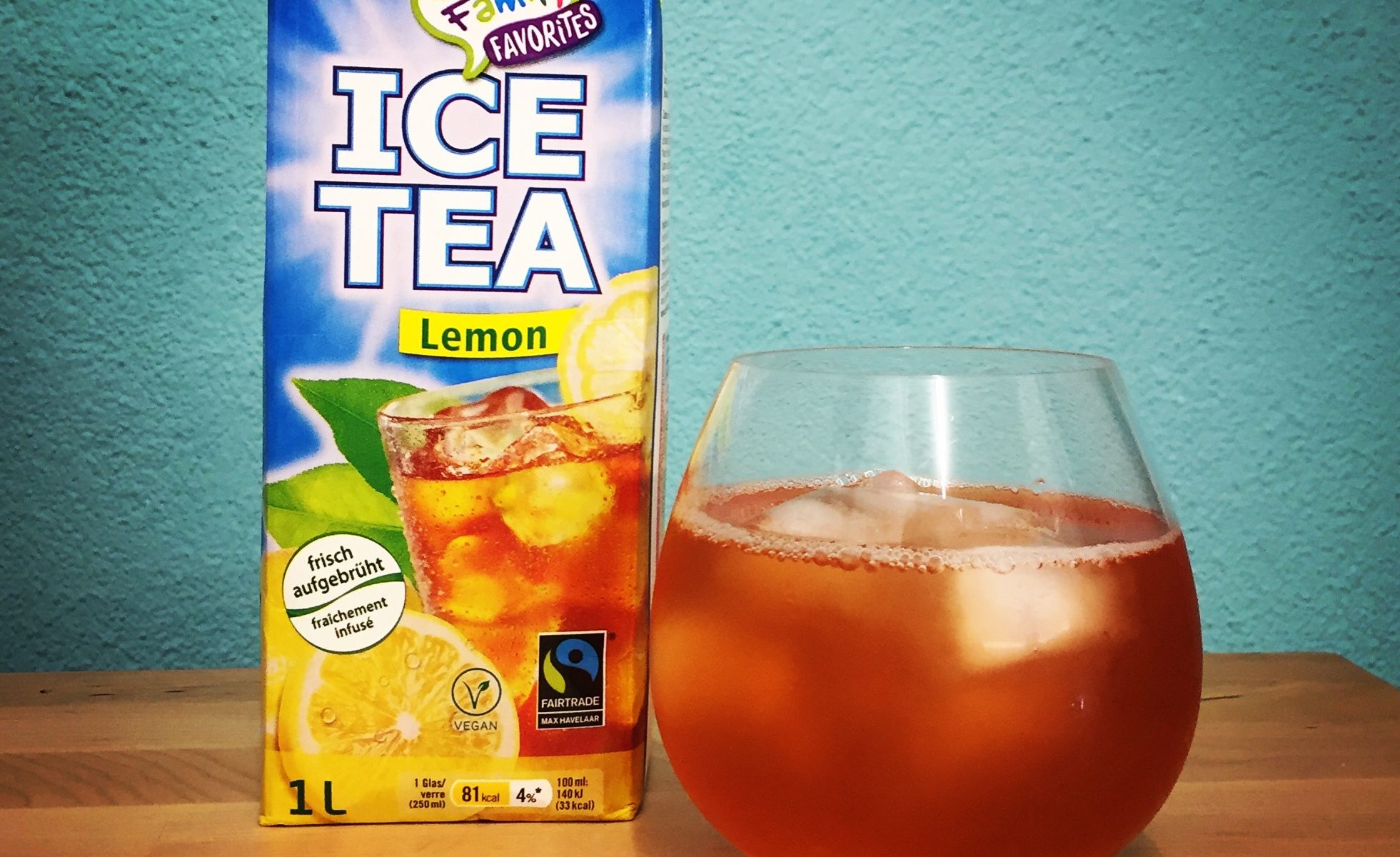 The Ice Tea Lemon from the Swiss Coop is a pretty standard black-tea-based ice tea – sweet and pretty refreshing, as long as it’s served ice-cold.

This sort of ice tea is the hardest to review, as it doesn’t have any one quality that would make it stick out: It’s a black tea based ice tea with lemon flavor and not unique in any particular way. Nevertheless the Ice Tea Lemon from the Swiss coop supermarket-chain is certainly amongst the better one’s of this type and I’ll try to find out why!

It is very similar to the lemon ice tea from the ‘Kult’ range of the competing Migros chain of supermarkets (full review here). I can’t get around the feeling that this ice tea as a whole – right down to its packaging design – is heavily inspired by its competitor Migros’s product with it’s cult-like-following that gives it its name. Nevertheless they do have a few differences, some of which make this ice tea from the Swiss Coop even superior to the original in certain ways (and in other ways not).

Color
A brownish-beige, almost with a hint of red, this ice tea is medium-clear: Just a little bit opaque, so that I can see through it, but not quite clearly. It’s a classic color for a black tea based ice tea and in my experience that’s usually a sign that it’s pretty sweet. (Compared to the Migros ‘Kult’ ice tea, it’s slightly darker and less opaque.)

Taste
As I said, you gotta drink it cold. (If I leave the glass for a moment and it warms up just a bit, the ice tea sticks to the edges of my tongue when I drink it – which makes me constantly lick my lips.) But the flavor is really nice – sweet and refreshing, just as an ice tea should be.

Its taste reminds me of the Migros ‘Kult’ ice tea. And as the label confirms, it does also contain rose hip tea, which gives it some of that distinctive taste. The difference here is that the Coop ice tea also contains hibiscus, whereas the other one has added roselle.
This one from Coop tastes sweeter on the lips than the one from Migros, but I tend to say almost too much so. I guess it contains more sugar and that’s also what makes it so sticky once it warms up.

Fairtrade & Vegan
One thing that makes it superior to its competition in my eyes, is the fact that is certified as fairtrade by the Max Havelaar foundation. Though even this is not a guarantee that it is 100% ethically sourced, it still shows a noticeable effort for a product that has several ingredients where this is critical: Both the tea and the sugar are imported from places far away from where this ice tea is sold.

The fact that this ice tea has a vegan certification is also interesting – even though really no ice tea should contain animal products, or is there something I’m missing here?

Availability
Only available at stores of the Coop supermarket-chain in Switzerland 🇨🇭.  Priced at 75.- cents (CHF or US$) per litre, it is quite affordable compared to other products on the local market (but still 5 cents above its closest competitor’s price-per-litre). 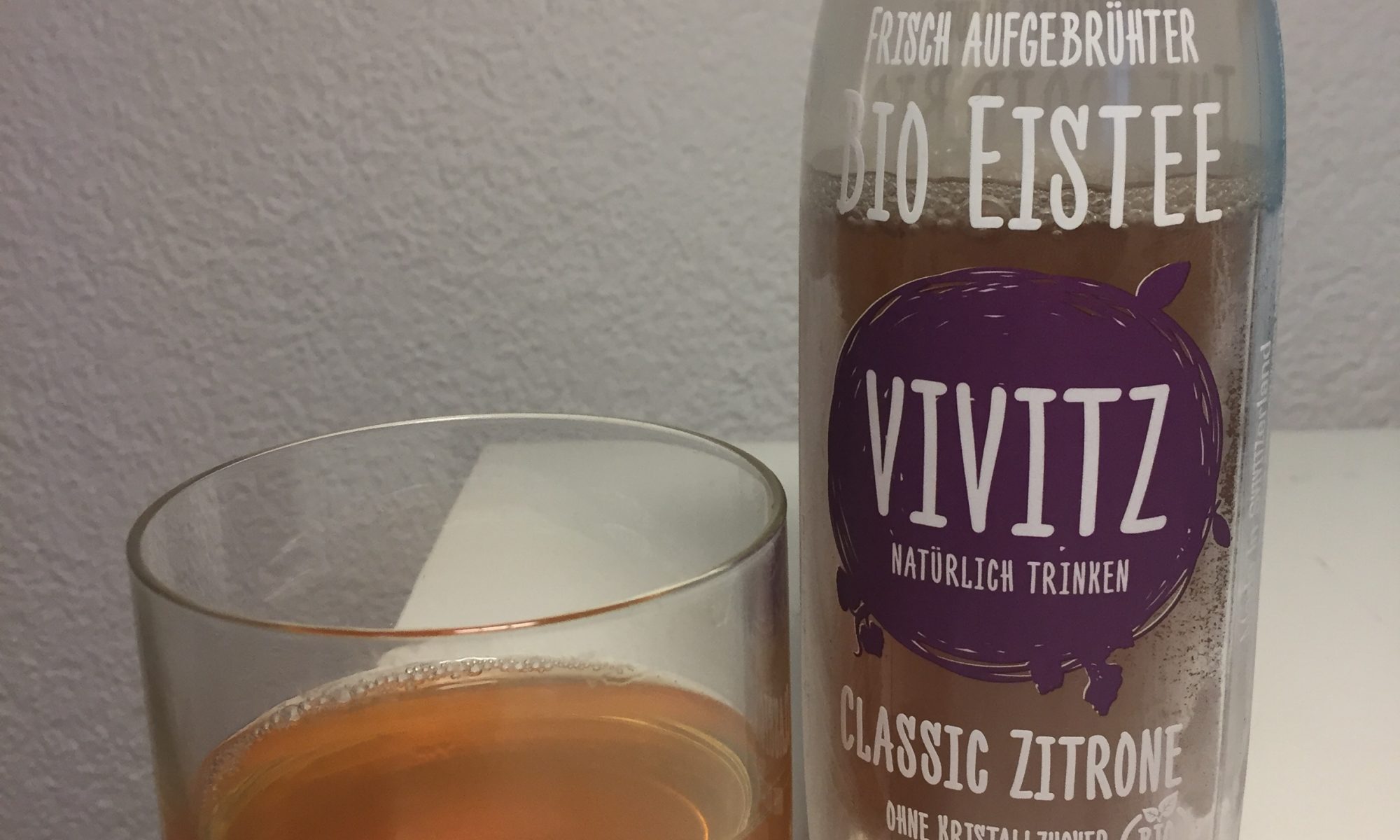 A surprisingly good, organic, vegan ice tea from Switzerland. It is a black tea with some agave-juice, without refined sugar and low on calories, according to its label. (It is from a certified organic Swiss production, with Switzerland having some of the most stringent organic (“bio”) certifications around. But the agave-juice being imported, this is certified by other ‘foreign’ organic certifications.)

Despite its lack of sugar, it is really sweet. The black tea gives it its full taste and the agave-juice, which seems to work as an excellent natural sweetener, is barely noticeable at first.

It tastes real sweet at the front of the tongue, but has the usual bitterness at the back and upon swallowing, which is common with pure black teas.

Again, this tea needs to be drunk ice-cold. As it warms up to room temperature, it can start to taste somewhat stale.

It is from a local Swiss production, meaning it is mostly found in small Swiss delis and organic groceries.